It’s time to provision our Request Metrics server. There is some common configuration that applies to all Linux servers. We want this base configuration regardless of what that specific server is doing. This a great use case for an Ansible role.

Previously, we configured Ansible to connect to our server using SSH keys. Now that we have connectivity, we can get to work with some actual Ansible goodness. Here’s a selection of interesting things from our “linux-common” role.

We don’t often login to our servers. Because it’s a rare event, we’d like to know when it happens. Sending an email with some basic information is a simple way to do this:

We hook into SSH login events using PAM and a shell script:

Learn about the Core Web Vitals

Server time seems unimportant until it drifts by minutes or hours. Logs get confusing, and software starts failing. The NTP daemon will update the local time from internet time servers to keep things in sync:

One of the many security commandments is, “Don’t user passwords for SSH.” We’ll be good guys here and disable password authentication in the SSH daemon configuration:

It’s nice to have names that match, if only for our sanity (and to assuage our OCD). We set the server’s host name to the name listed in the ansible inventory file:

Ansible roles behave much like playbooks in that they contain a set of tasks to be run. There are some important differences however: 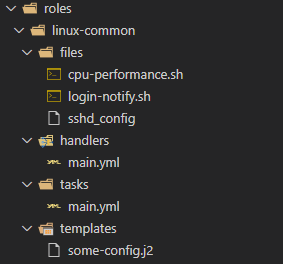 It’s easy to get started with Ansible, but some things that are good to know up front:

Now we have a Linux server that is ready to rock. Next, we’ll set up NGINX and use systemd to run our ASP.NET Core application.

Get Tips on Web Performance